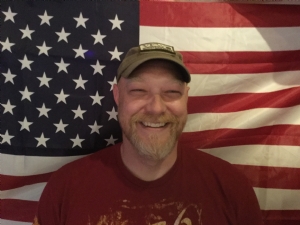 Tom Served in the United States Navy from 1992-2013. First serving on Carriers USS Saratoga, USS America, and USS Eisenhower. He transferred to the reserves in 1998, then was assigned as a Seabee to Naval Mobile Construction Battalion 24. In 2005 and again in 2009 Tom was deployed to Al Anbar Province, Iraq with NMCB 24. Assigned on both deployments to the Battalions Convoy Security Team's. These deployments earned him qualification in the VFW by earning the Iraq Campaign medal. In 2013 Retiring as a Chief Petty Officer of the Navy assigned to NMCB 22 out of Forth Worth Tx.
Education/Other:
Spending two years in aviation school to become a pilot. In 2003 he applied for and was accepted as a Lexington Firefighter. Retiring from that position in 2013 due to injury.
Tom spends his time now with his 4 Girls, and Wife Nicole.
Currently holding the position of third year trustee for the post.

EVERY FRIDAY:
Dinner at 530pm, menu varies
Queen of Hearts Draws at 730pm
Karaoke After Queen drawing on Fridays
Monthly membership meeting third Tuesday of the month. To be held at 1830, if you cannot attend please see your email where a link will be provided shortly before to attend via zoom.
please check the calendar routinely as we are adding events.