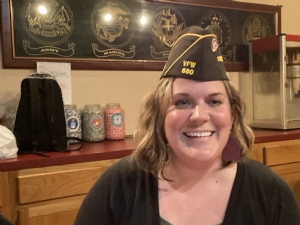 Kimberly Fultz served in the Air Force during Operation Iraqi Freedom. In 2003, she worked on a joint force team with the British Royal Engineers to build the first base in Iraq. She redeployed in 2004 to Abu Ghraib prison with an engineering unit that improved base defenses and living conditions for both the prisoners and military personnel stationed there. Kimberly has served in ministry for the last 10 years and recently became the Chaplain at the VFW Post 680 in Lexington where she is looking for more opportunities to combine her love for ministry and veterans.

EVERY FRIDAY:
Dinner at 530pm, menu varies
Queen of Hearts Draws at 730pm
Karaoke After Queen drawing on Fridays
Monthly membership meeting third Tuesday of the month. To be held at 1830, if you cannot attend please see your email where a link will be provided shortly before to attend via zoom.
please check the calendar routinely as we are adding events.